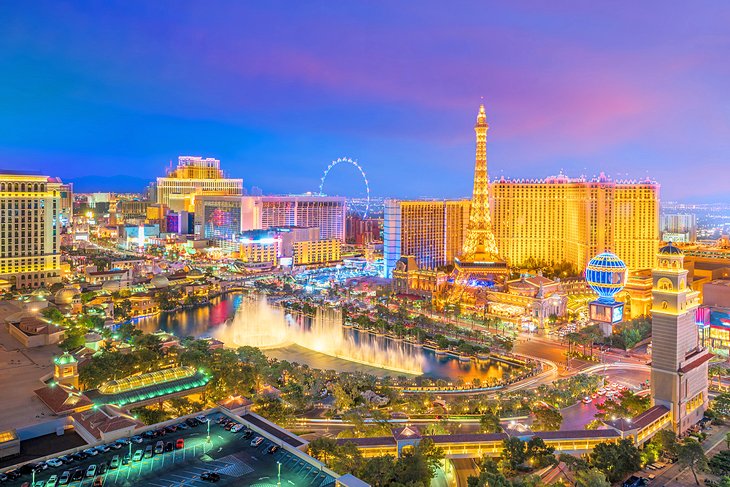 Let’s face it, nothing’s cheap in December. Between present-buying and that new outfit you must have for the office party, costs creep up quickly during the holidays. Have you ever wanted to escape it all and relax somewhere fantastic without the pressure of endless parties and gift wrapping? We’ve got good news: December is a fantastic month to find travel deals – as long as you’re planning to vacation before Christmas and New Year’s.

Airlines and hotel companies want to fill up their seats (and rooms) prior to the holiday rush, so great bargains abound. From a luxurious beach break to a week spent in the wonderful chaos of Vegas, this list offers an extensive range of vacation spots to suit even the lightest pocketbook.

Trust us, we know just how little there is left after all that holiday spending. The earlier you book, the better the price, so get moving! Plan your trip with our list of the best cheap places to travel in December.

Step into the action with a trip to Las Vegas. Known for its unique atmosphere and non-stop buzz, this desert city takes you from New York to Paris, all in one strip. The best part: it’s affordable. The cheapest December vacation on this list, Vegas wants you to visit so much that its hotels offer incredible deals.

Whether you’ve dreamt of staying at the Bellagio Las Vegas, Excalibur Hotel, or MGM Grand Hotel, you’re sure to find an affordable rate in the lead up to Christmas. Book your stay as part of a travel package, and the savings become even more attractive.

While you’re here, make time for a walk along The Strip, a trip to the Mob Museum, and a tour of the nearby Grand Canyon. 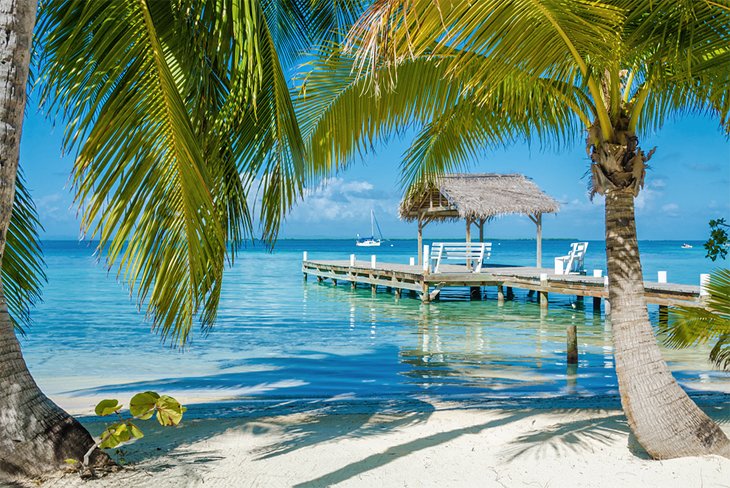 Dock and palm trees in Belize

Want fun in the sun without a giant price tag? Book a trip to Belize. Do it in December, and you won’t Belize the deals (sorry, we had to)! From exploring Mayan ruins to diving in the Great Blue Hole (a massive marine sinkhole) to snorkeling along the Belize Barrier Reef (the world’s second largest reef behind Australia’s Great Barrier Reef), there’s plenty to do in paradise. Not a big swimmer? Visit the Mountain Pine Ridge Forest Reserve for a beautiful hike through pine forests, around waterfalls, and through caves.

Your wallet will welcome the load of extra cash you’ve saved by timing your trip for this perfectly warm (about 82 degrees), relatively dry time of year. Plus, the pristine beaches, dense jungles, and inviting turquoise waters will help you forget about any money (or other) woes. 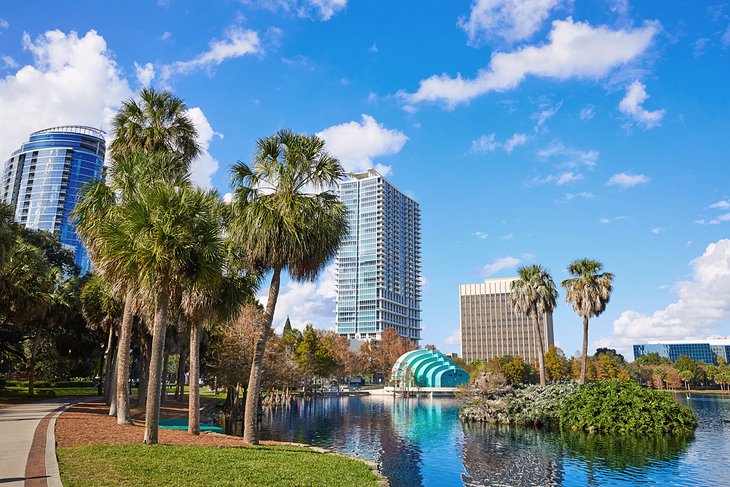 It may not be the most romantic Floridian destination, but Orlando often offers the best deals, especially during the lead up to the holidays. At this time of year, many of Orlando’s hotels are close to half price. You’ll likely get lucky in the airfare department as well, particularly if you book early.

With all that money you’ve saved, why not treat the kids (and yourselves) to a pre-holiday visit to Disney World, Universal Studios, or Sea World Orlando? Not up for insane crowds and listening to “It’s a Small World” on repeat? Snorkel in Discovery Cove or visit the sloths in Orlando’s Exotic Animal Experience.

Accommodation: Where to Stay in Orlando: Best Areas & Hotels 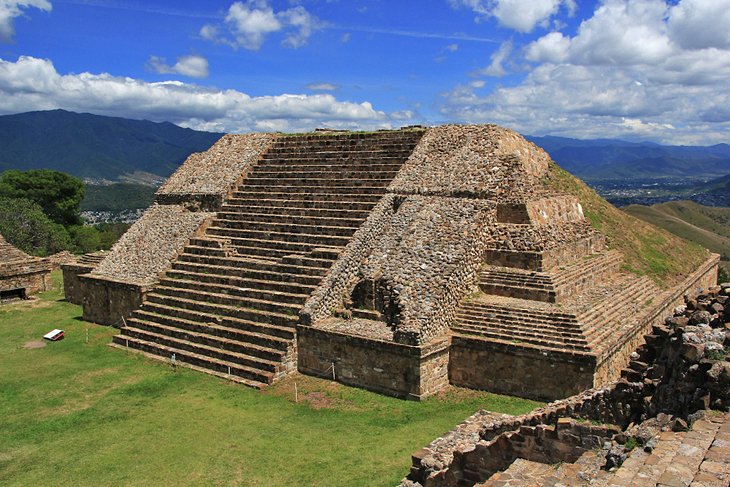 This Southern Mexican city has plenty to offer tourists looking for a good deal in December. Enjoy great savings on hotel rooms and at some local venues as well. Let’s face it, you’re likely heading to Mexico for some sol, so plan to spend quality time poolside.

When you’re not soaking up the rays (while wearing sunblock, of course), Oaxaca boasts a ton of activities to keep you busy and intrigued. Book a bike tour, soak up the history at the ancient ruins in Monte Alban, take a cooking class (who doesn’t love Mexican food?), or visit one of the multiple churches in town. Love museums? Soak up some culture and history at the Museo de las Culturas and Museo de Filatelia de Oaxaca, A.C. Then, take to the markets in the city’s central square, Plaza de Armas.

Don’t miss Noche de los Rábanos (a.k.a. Night of the Radishes) on December 23. This historic festival began in 1897 and includes fireworks, music, dances, great food, and a competition for the best-carved radish.

Accommodation: Where to Stay in Oaxaca 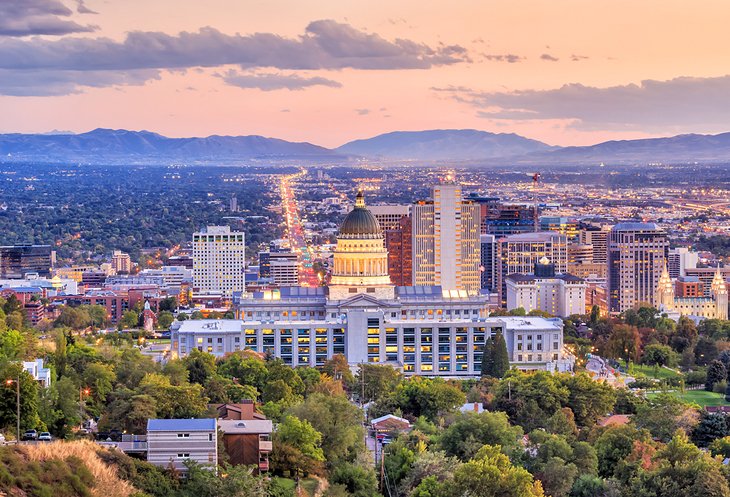 Whether you’re a ski bum or a culture buff, there are plenty of reasons to visit Utah’s capital. The fact that Salt Lake City is a relatively cheap place to visit during December is another plus. Those who plan to stay in the city can save even more cash by dashing about on public transportation. The Utah Transit Authority has numerous helpful options to get you where you need to go. If you want to ski, though, you’re best off renting a car, which is also cheaper before the holidays.

Founded by Mormons (Latter Day Saints) in 1847, this capital city boasts an impressive Mormon Temple. Only Mormons are allowed inside, but the rest of us can marvel at the architecture from the sidelines. All are welcome to visit the nearby Mormon Tabernacle, a large, domed auditorium that seats over 6,500 and boasts a pipe organ with 11,623 pipes. The famous Mormon Tabernacle Choir performs here. Bonus: it’s free. Nature lovers and avid hikers won’t want to miss Big Cottonwood Canyon. 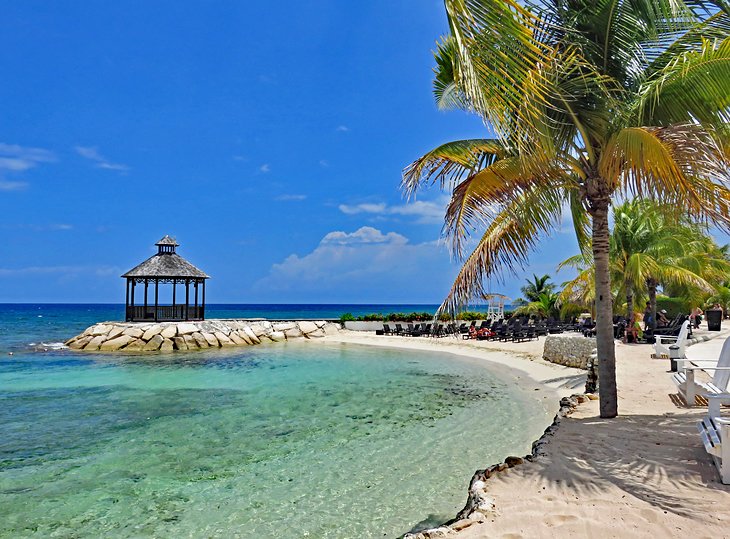 Looking for an affordable beach destination? It’s time to get jammin’ in Jamaica mon. Both Montego Bay and Kingston are popular vacation spots for those who love to relax. And they both offer great deals in December.

Plonk your body on a beach chair, hike through mountains, snorkel, or chill out by the pool, warm with the knowledge that you saved on both airfare and hotel costs for this trip. Another bonus: with plenty of hotel shuttles and taxis on offer, you won’t need to splurge on a rental car.

An all-inclusive may be your cheapest bet if you don’t want to blow your budget on food. Plus, you’ll have paid all the money upfront, which means you can rest easy and choose anything you’d like from the menu without guilt.

Accommodation: Where to Stay in Montego Bay 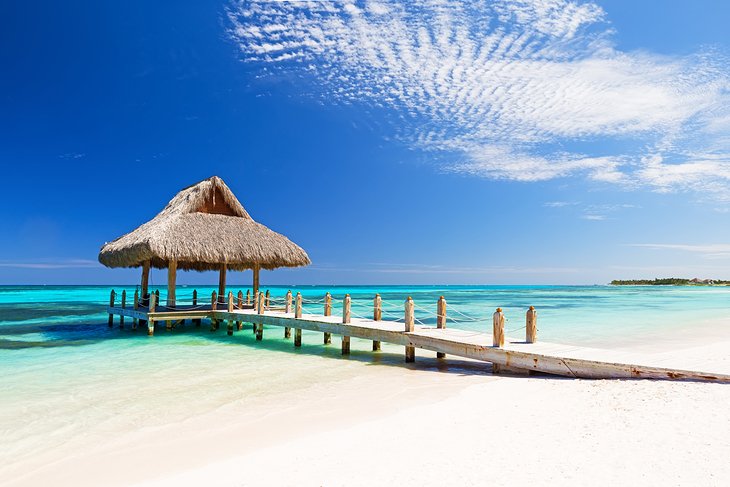 A beautiful beach in Punta Cana

Punta Cana is the place to be if you’re dreaming of somewhere warm, bright, and beautiful. It’s also often a good deal by Caribbean standards, with affordable all-inclusive packages.

Surrounded by turquoise water and white, sandy beaches, this picture-perfect spot on the eastern side of the Caribbean’s Dominican Republic is pretty close to paradise. Adventurers can zipline through the rainforest canopy, windsurf, kiteboard, sail, dive, or snorkel. Not up for all of that? Don’t worry. You can golf, ride horses, walk the beach, or float in the pool.

Another plus? December is the time to catch good deals and weather. This month offers highs of about 85 degrees and less rain than you’ll find from April to November. It’s ramping up for high tourist season, so hotel and airfare prices will be on the more affordable end of the spectrum. 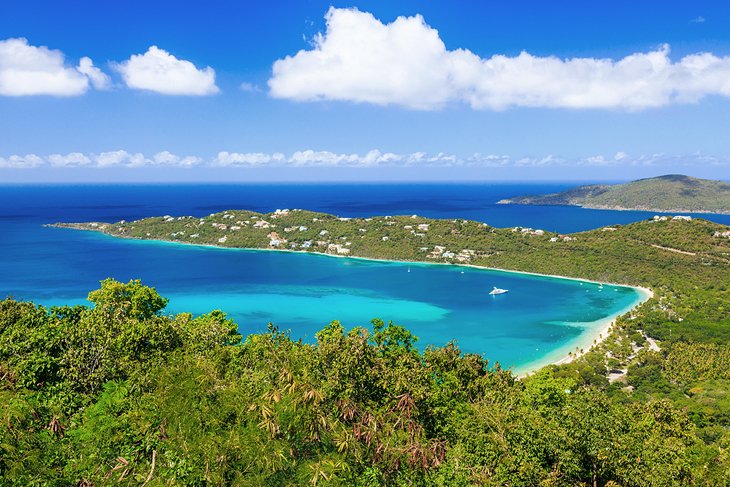 One of the most popular tourist destinations in the Caribbean, the U.S. Virgin Islands offer an unforgettable and truly relaxing vacation. Those who visit St. Thomas can enjoy swimming with turtles, snorkeling, or diving in the bright blue ocean, golfing, shopping, and fantastic food – not bad for an island that’s only 32 square miles.

Sadly, a great deal of St. Thomas was damaged by Hurricane Irma in 2017. Today, though, much of the island and many of its fabulous hotels are back up and running, looking for visitors to help reboot the tourism industry, which is so vital to their economy. The upside for travelers: cheaper flights, hotels, and restaurants and a chance to help get St. Thomas back on its feet. 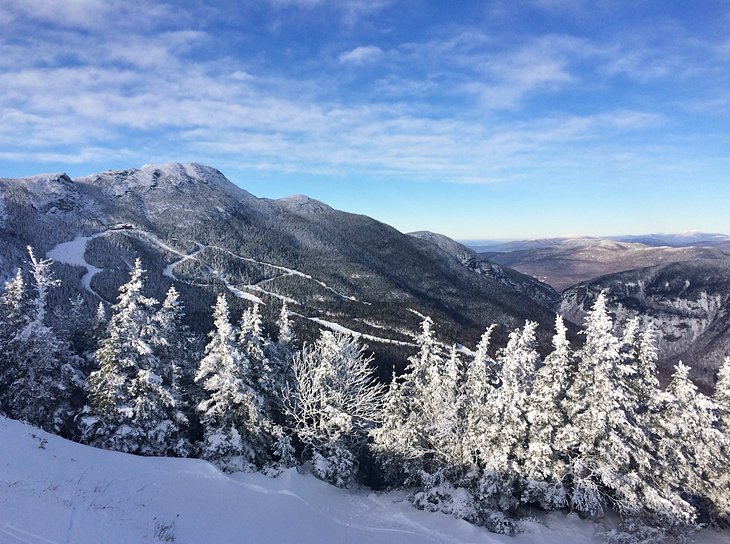 While some ski resorts in Vermont offer big savings on lift passes at this time of the year due to run closures, Stowe does not. That’s the bad news. Now for the upside: they don’t have to because they get more snow than most resorts in December and have more runs open for you to ski. Plus, if you book lift passes online at least seven days in advance, you’ll save money no matter when you plan to come.

So, what’s making this a cheap holiday, you ask? The savings come in the form of hotel deals. Rooms in early to mid-December can be over $100 cheaper a night, which leaves you with plenty left over for shopping or lift tickets.

While you’re still soaking up the high from saving your hard-earned cash, take time out to revel in the beauty that is Stowe. Non-skiers will love the spa amenities found in many of the resorts, and the town’s shopping and restaurants are first-class. In addition to the unbeatable skiing and snowboarding, activity seekers can enjoy indoor rock-climbing at Stowe Mountain Resort or ice-skating at Spruce Peak Village. 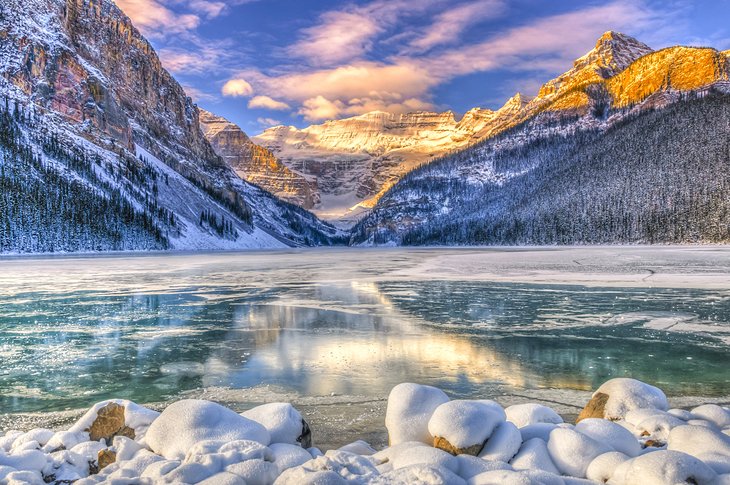 Banff truly shines during its best season – winter. From world-class skiing and snowboarding to snow shoeing, cross-country skiing, skating, curling, and sledding, there’s no lack of outdoor activities in this spectacular village. Those who crave adventure won’t want to miss the Johnston Canyon Icewalk. Conditions can be slippery and dangerous, so it’s safest to book a guide. Want to relax? Book a horse-drawn sleigh ride through snowy meadows or bathe in the Banff Hot Springs.

Skiing at Banff is expensive, no matter when you do it. That said, the longer you ski, the more deals you get, especially in early to mid-December. If you book a “Stay and Ski” package, you’ll notice great savings, including cheaper room rates and discounted lift tickets at three resorts: Banff Sunshine, Lake Louise Ski Resort, and Mount Norquay. Banff loves early birds, so the sooner you book, the better the savings. Same goes for your airfare.