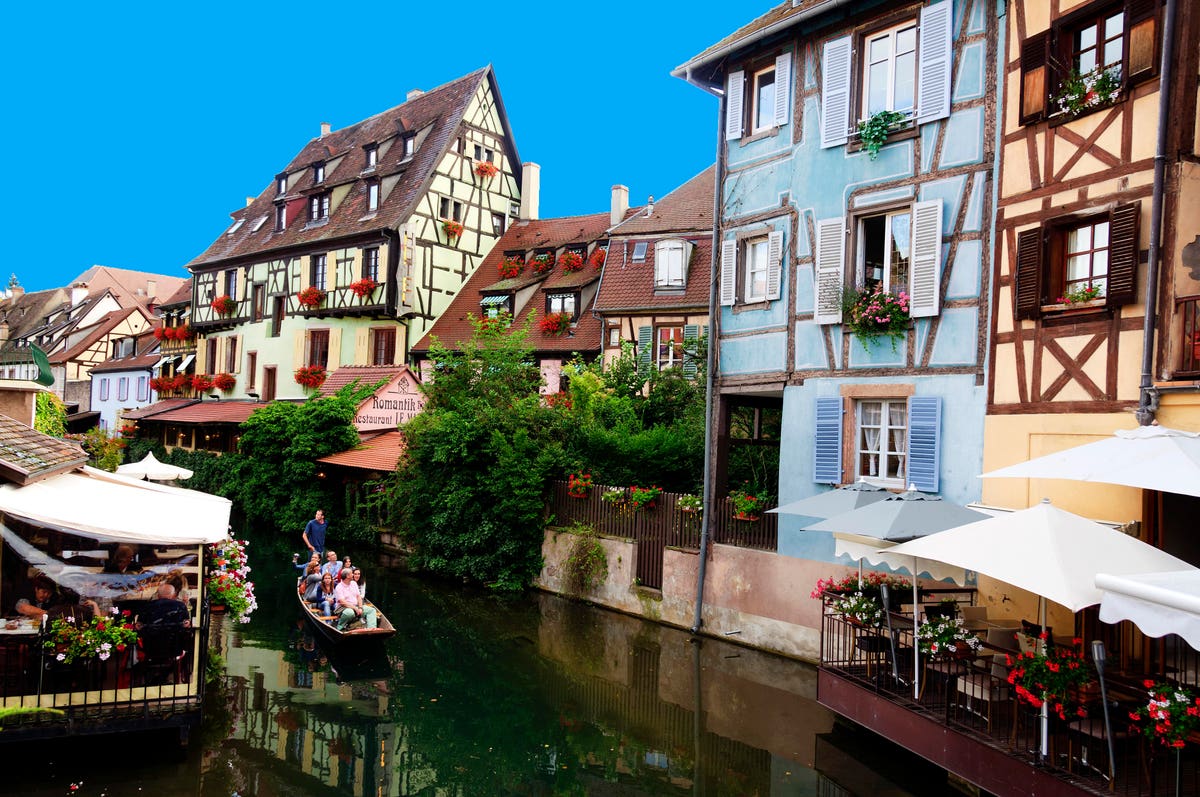 The city of Colmar, in France’s northern region of Alsace, has been voted the #1 European destination for 2020, chosen from 20 ‘must-see’  locations that made the finalists’ list of contenders for the coveted title organized by European Best Destinations (EBD).

For its 11th edition, the competition collected a record of more than 600,000 votes for the trendiest destinations in Europe, a list that will be promoted throughout the year to millions of travelers — and will be authorized to display the title “European Best Destination” in their marketing.

“Whether you look forward to a city break, a romantic getaway, a family or beach holiday, a cultural or gastronomic trip, alone or with friends, you will be spoilt for choice,” the organization promises.

Since 2009, European Best Destinations (EBD), has been promoting culture and tourism in Europe to millions of travelers, tourism professionals and the media. Working with the European Commission to promote sustainable tourism, EBD organizes some of the main tourism competitions in Europe, including Best European Christmas Markets, Best European Beaches, Most Romantic destinations and Best European Ski Resorts.

In partnership with over 300 tourism offices in Europe and the EDEN Network created by the European Commission, the European Best Destinations is, for the eighth year in a row, the most visited website dedicated to travel in Europe.

Here you can find the complete guide to plan your next vacation.

First on the podium of best European destinations: a well-deserved award for Colmar, a destination known worldwide, that has it all: It’s the capital of Alsace wines and a leading wine-tourism destination. It’s also a perfect destination for romance, history buffs, foodies, music and culture lovers.

Colmar is known as the sunniest city in France, enjoying 300 sunny days a year. It is particularly magical at Christmas time. Around Colmar are the picturesque villages of Eguisheim, Riquewihr and Ribeauvillé. You can drive along the wine route and visit wineries or simply stroll among the vineyards.

Trendier than ever, Athens is a city in constant evolution

Trendier than ever, Athens is a city in constant evolution. Tradition meets modernity in museums and shops, restaurants and bars. Together with Rome, Athens is the cradle of our civilizations, an incredibly dynamic, lively, sparkling open-air museum.

With equal measures of grunge and grace, Athens effortlessly merges the past with the present. A city of paradoxes and great contrasts, in the country that first invented courtesy and generosity towards people who are far from their home, hospitality (xenia) reigns supreme.

An intellectual beacon of the ancient world with spectacular Mediterranean landscapes bathed in the famous light, Athens is a sophisticated cosmopolitan hub with many gastronomic offers, livelynightlife and a booming art scene.

An aerial picture shows the buildings of Old Tbilisi.

The Capital of Georgia is the ideal destination for culture, gastronomy, diversity and architecture lovers.

Magnificent Haussmannian buildings mingle with structures dating from the Middle Ages. You can enjoy neo-classical, Soviet and extremely modern buildings — at the same time. “Be sure to climb to the top of Tbilisi and admire the Kartlis Deda statue, the protector of the city. This site offers an exceptional panorama of the Georgian capital, the Peace Bridge, the Metekhi Church, the thermal baths, the new theatre and the Mtatsminda Amusement Park for young and old,” EBD recommends.

Along with Paris, Rome, Bruges and Prague, it’s one of the European capitals of love. As one of the safest destinations in Europe, Vienna is also an ideal destination for families.

“Climb aboard one of the most beautiful big wheels in Europe and whistle Strauss’ Blue Danube,” advises EDB. “You can also make your marriage proposal or treat yourself to a guided tour of the Schönbrunn Palace and learn how to cook the famous ‘Strudel’.”

Cascais is one of the most beautiful and prestigious coastal destinations in Europe.

Located on the Lisbon Coast, Cascais is perfectly situated just two steps away from the capital city and other must-see locations such as Sintra (UNESCO Heritage Site), Ericeira (World Surfing Reserve) and Mafra (the Portuguese Versailles).

With its year-round mild climate, Cascais is known as the ‘Portuguese Riviera.’ “From pure leisure to business, golf, sun, sea and water sports, it simply has it all and offers a new definition of the concepts of eco- and activity based tourism,” according to EBD.

A street in Sibiu, Romania

Which other destination can offer Bruges or Parisian-level culture and gastronomy, be as instagrammable as Prague or Santorini, as romantic as Rome or Venice? Look no further than Sibiu (in Transylvania).

There’s poetry and beauty on every street corner and eyes on every roof. This rich city, one of the most visited in Romania, represents 800 years of history in an unspoilt setting yet remains one of the most modern and dynamic cities in Europe.

A gastronomic tourism destination – the only city in Romania to be awarded three Michelin stars — Sibiu is a destination for history buffs, outdoor activities fans, photographers and hikers.

A street in Namur.

For foodies, instagrammers and those who love shopping, cocooning, culture, nature walks, evenings with friends or romantic city breaks, Namur is a must-visit.

A charming city with the Belgian surrealism of Brussels and the romanticism of Budapest or Bruges.

Among the most interesting destinations in Belgium, Namur is not just about relaxation and pampering. It also offers outdoor sports, paddling, hiking and other activities for young and old. “During your stay, do not forget to climb to the top of the Citadel and treat yourself to a romantic cruise on the Meuse,” recommends EBD. If you have some time left, don’t miss neighboring Dinant, where the river Meuse also flows. Both towns share the moniker “daughters of the Meuse.”

One of the most fashionable cities in Europe, it’s at the top of the wish-list of travelers who have already toured major cities and are looking for something different.

Croatia’s third-largest city, it also was declared ‘European Capital of Culture’ in 2020. Rijeka is a destination for discerning travelers who don’t want to choose between beach and city, culture and nature, tradition and modernity. It has it all.

“Do not miss the Rijeka Carnival, one of the most beautiful in Europe,” EBD insists. Art lovers shouldn’t miss a visit to the Museum of Modern and Contemporary Art.

Relaxation and wellbeing are key words for travelers to Hévíz, a name that means “hot water” in Hungarian. The city has the world’s largest natural thermal lake surrounded by lush forests.

Located near Budapest and Vienna, Hévíz has been welcoming spa visitors since the 18th century. It’s probably the only spa destination where you can swim among white, pink and purple lilies, relax with thermal mud massages on a floating pavilion on the lake, row a canoe in the steamy warm water of the stream or have a winter swim in the 24°C thermal lake while large snowflakes fall around you.

This destination is ideal for families and lovers of outdoor sports (kayaking, golf, cycling, hiking) as well as gourmets.

One of the trendiest destinations in 2020 for those who like to think outside the box and want an unforgettable urban break.

The city has an incredible cathedral, considered one of the most beautiful Gothic churches in Europe with its unexpected explosion of colors inside. EBD recommends that you take “a walk along the photogenic Brda River or relax on the Mill Island or go paddling.”

Looking for another place to blow up your Instagram account? Visit the Museum of Soap and History of Dirt, which attracts visitors from all over the world.

Bydgoszcz offers trendy and traditional bars and restaurant as well as affordable hotels.

A colorful, jazzy, sporty, culinarily innovative and traditional destination. In one word, Cork is very…Irish.

More than merely a common city break, this is a holiday by the sea, hiking or biking with the children, great restaurants, wellness retreats, kayaking, windsurfing. The point: Cork has it all, from dramatic natural landscapes and mountains to river valleys and coastlines.

The most family-friendly of the 2020 selections, Rochefort Océan, located in Charente-Maritim, is a favorite sustainable-tourism destination in Europe and has been selected and rewarded by the European Commission for its commitment to the environment.

On the French west coast, Rochefort Ocean combines history and heritage, nature and scenery. “Go bird watching, have a cruise around Fort Boyard, visit the former naval rope-making unit, enjoy the thermal baths,” invites EBD. “Or what about lazing or sunbathing in the typical and historical French seaside resort of Fouras? Or fishing or sailing or windsurfing in Port des Barques?”

With a 25 kilometer-long coastline and five beaches, Rochefort Océan is a dream destination for seaside holidays. On the other side of the estuary, the oyster farming Port-des-Barques is ideal for a walk to Ile Madame, the smallest of the four Charente Maritime islands.